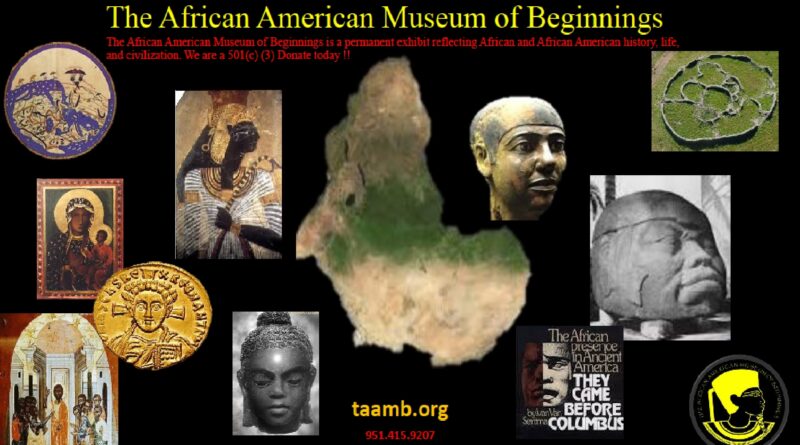 The African American Museum of Beginnings is a virtually self-funded community museum that inspires and educates all on the history, culture, and arts of Africans and African Americans through exhibits, programs, and community engagement. The AAMB, co- founded by Vikki and Khalif in 2011 as small community museum in the village at Indian Hill in Pomona, is now moving boldly into its twelfth year of “showing it like it is”. From its inception the AAMA has presented the most comprehensive and irrefutable visual narrative of Africa as the birthplace and absolute foundation of world culture and civilization found anywhere in California and most of America. The AAMB is coming of age.

In April of 2021 the African American Museum of Beginnings has joined the African American Advisory Alliance located on the Pomona mall at 406 West 2nd street, downtown Pomona. The Alliance is another historic step toward unity (UMOJA) for Black folk as we repair ourselves. The AAMB has contributed an exhibit, “A Slice of The AAMB”, now being housed at the Alliance building. In addition, we currently have similar exhibits at Garey High school at 321 W. Lexington Ave. Pomona, CA 91766. In the coming months “A Slice of The AAMB” may be at a school or venue near you.

……Did you know The African American museum of Beginnings provides group tours? We also conduct all day research tours for middle school and senior high students and adults. In addition The AAMB conducts Inservice training for teachers and administrative staff and for all who care to learn and connect and be apprised of the history, culture and art of Africans and African Americans.

The African American Museum of Beginnings provides is open Wednesdays Thursdays and Saturdays from 12noon to 6:00 P.M. or by appointment.