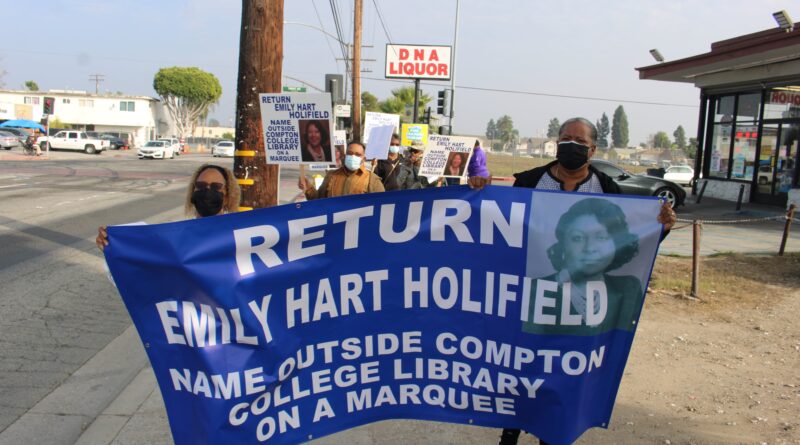 A group of Compton residents met on November 20 to advocate for the restoration of Emily Hart-Holifield’s name on the Compton College Library.

The main consensus of the group, and as Hart-Holifield affirmed in an interview, was that “The name was removed for no good reason,” she states. “It should have been transferred to the new building.”

The group met at a garden located near Compton Blvd and Dwight Ave. After sharing their background and connection with Hart-Holifield, they marched along Compton Blvd inviting cars and walking citizens to look at their signs and ask questions.

Jackie Barra, the chairperson for the group, recently sent a letter to the current board of trustees at Compton College and their president, Keith Curry.

“I sent a letter asking for details about why the name was removed and requesting it be put back on and they’ve yet to get back to at all,” Barra states.

She, along with other members of the group, believes that Hart-Holifield’s contributions to the City of Compton and Southern California deserve to be recognized.

Hart-Holifield is responsible for starting the first block club in Compton. Her efforts brought unity to community input and eventually led to each citizen of Compton having a say in how the city operated.

She was the first woman to run and be elected to the Compton College Board of Trustees, where she sat for 20 years assisting in the oversight of the school’s mission and goals.

Additionally, in 1991 while serving as the Educational Chair for the Compton chapter of the NAACP, Hart-Holifield testified in favor of THEN- Judge Clarence Thomas, during the Associate Justice of the U.S. Supreme Court confirmation hearing. This was held in front of THEN- Sen. Joe Biden and the United States Senate Judiciary Committee.

When asked what it meant to be recognized for her contributions, Hart-Holifield said, “It means so much. It means more to the youth than it does to me. During that time, I wasn’t trying to make a name for myself. I was just doing the things that I thought were right, especially what I thought would benefit the youth.”

According to Hart-Holifield, the name being shown outside of the library serves as a testament to young people and passersby that they can grow and contribute.

Originally from a plantation in North Louisiana, Hart-Holifield states that revisiting the college now reminds her of life back there. She suspects racist or nefarious intent behind the removal of her name which she believes the lack of communication between the board of trustees and President Curry also reflects.

“What makes it so sad is that I was on the board when I suggested that Senator Dills’ name be put on the college, and he’s a white guy,” she states. “And his name is still up and mine is down.”

According to Hart-Holifield, there is a policy in place saying that those whose names are on the building must be deceased for it to be so. She’s concerned that the timeline of when the policy began and the removal of her name don’t match.

Additionally, both her name and Senator Dills’ name were on the building while alive. Her name was removed, however, along with the first African American president of Compton College, Dr. Abel B. Sykes Jr., who died in 2012.

“I really don’t know the rationale,” Hart-Holifield states. “They never called me. They never said ‘Mrs. Holifield, we’re about to take your name down and we just wanted you to know so it wouldn’t be a surprise.’ They never gave me that on it.”

Having started the first women’s GOP in the city, the Compton Hub City Area Republican Women Federated, served in senior chair positions on Compton College’s Board of Trustees for 20 years, and contributed countless hours to Compton youth as a teacher and role model, Hart-Holifield is hurt at the college’s decision to not restore her name and lack of communication as to why.

However, in closing, she states, “I have faith in God that my name will be restored on behalf of the youth in Compton. On behalf of the taxpayers, the citizens, and the right thing to do.”

The group will be meeting regularly to discuss the restoration and spread news. Check back for more information. 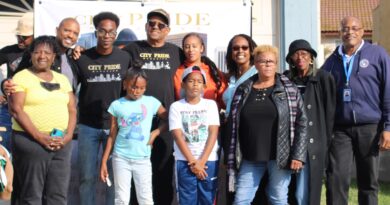 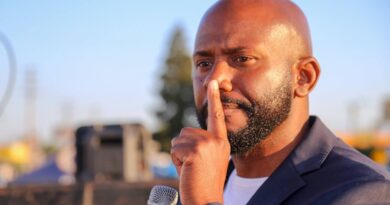