California is home to an estimated 11 million immigrants and many of them are Black — from Africa, Latin America, the Caribbean, Europe, and other parts of the world.

According to the Black Alliance for Just Immigration (BAJI) at USC, immigrants make up 6.5 percent of California’s Black population. That figure has doubled since 1980.

From Silicon Valley engineers and Hollywood celebrities to medical professionals, small storefront owners, rideshare drivers, and hotel housekeepers, Black immigrants are as diverse as the general population in California.

They live in small clusters in inland valley towns and in larger ethnic enclaves in San Diego, San Francisco, and Los Angeles — or they blend into suburban communities across the state, according to data collected by California Black Media to support its Census 2020 awareness mapping.

But many Black immigrants have been uniquely affected by the coronavirus crisis. Like all Californians, they are dealing with the dangers of the disease and the economic and social uncertainties it has caused across the Golden State. At the same time, they are worried about how the global pandemic is affecting relatives back in their homelands.

Across the United States and in California, large numbers of immigrants work in the healthcare field. Many more are other essential workers, toughing it out on the frontlines working in the service industry or in medical, transportation, and sanitation jobs.

In California, 35% of all healthcare professionals are immigrants, according to the Migration Policy Institute.

Mawata Kamara, who is originally from the West African country Liberia, works as an emergency room nurse in San Leandro, a suburb east of the San Francisco Bay in Alameda County. She said that her hospital currently sees about two to three COVID-19 patients a day.

According to Kamara, she gets confused trying to keep up with the government’s guidance regarding the pandemic. For example, she’s currently reusing N95 masks, which used to be forbidden, she says. She also gets a stream of emails with constant updates — sometimes conflicting news — about the virus itself, safety changes, or how to treat the disease.

“The general feeling of unpreparedness is everywhere,” said Kamara.

As an African immigrant, Kamara says she sees the unique challenges that Black people, both immigrants, and American-born Blacks, face in dealing with COVID-19. One of the reasons the disease has affected the Black community is because many people live in multi-generational families, Kamara says. This makes it very difficult to self-quarantine. Kamara said one of her African co-workers faced this situation when she contracted the disease and didn’t want to take it back home where she lived with several relatives.

“Self-quarantine is a luxury most people can’t afford,” she said.

Kamara has taken to changing her clothes in the garage and cleaning her shoes before she enters the home she shares with her daughter.

“I don’t think anyone wants to go to work and bring it back home,” said Kamara.

Kamara is also concerned about her native country, Liberia, which has been affected by the disease. The country currently has more than 210 COVID-19 infections. About half the patients have survived. Twenty people have died from the disease.

Liberia, which has an underdeveloped healthcare system, was devastated by the Ebola pandemic which started in 2014 and resulted in more than 11,000 deaths. Kamara has advised family members who were visiting the country to return to the United States so they can have access to better quality health care.

Although coping with the challenges of COVID-19 is grueling for Black immigrants in California like Kamara who are naturalized citizens or have Green Cards, it is even more difficult for those who are undocumented. They did not qualify for the federal $1,200 stimulus payments the federal government has been sending out.

There are an estimated two million undocumented immigrants in California.

Earlier this month, Gov. Newsom announced a new $75 million California state program that will provide disaster relief to undocumented immigrants in payments of up to $1,000 per household. The program will begin on Monday, May 25, and the money will be awarded on a first-come, first-serve basis. See the list below for organizations that will be distributing the money.

In Los Angeles, Lyndon Johnson is the publisher of CaribPress, a publication that covers West Indian news and events in Southern California, around the United States, and in the Caribbean. He is originally from Jamaica. Johnson said the disease presents a unique danger to people from his country because many of them also work in the healthcare field.

Johnson says some of them are his family members. “One of my sisters is scared to go to work,” he said.

Johnson said he recently participated in a Zoom meeting with members of the Jamaican diaspora who connected to talk about how COVID-19 is affecting them.

The island of Jamaica has also changed its rules to deal with the disease. Jamaica currently has more than 500 infections and nine deaths. Johnson said people coming in from certain countries are automatically quarantined.

The Jamaican economy, Johnson says, relies heavily on tourism, but COVID-19 has brought travel to his home country to a halt. According to the Caribbean Journal, Jamaica earned some $3.3 billion in 2018 from tourism.

Johnson said the Caribbean Comedy Series, one of the largest West Indian cultural events held in the Los Angeles area, had to be canceled this year. It was supposed to be held in March.

Many Caribbean community organizations in California and around the country organize annual health missions, where they return home and perform healthcare checkups. Those have all been canceled as well, said Johnson.

In San Diego, Chuol Tut, executive director of the South Sudanese Community Center in San Diego, said there are about 4,000 Sudanese (from both South Sudan and North Sudan) living in the San Diego area. He said they are attracted to the area because of the climate, which is similar to their homeland.

South Sudan is the world’s youngest country. It gained its independence in 2011 after years of conflict with Sudan, a country that is 97 percent Muslim. South Sudan is predominantly Christian.

Tut said the community has been impacted by the coronavirus outbreak because many of them work in front-line jobs such as drivers, healthcare, casinos, and housekeeping. Currently, many of them are out of work.

Tut said the center, located in East San Diego, is assisting some of them to apply for unemployment benefits because some of them struggle with speaking English.

COVID-19 has also affected the nation of South Sudan. According to Tut, there are currently more than 230 cases and one fatality. Also, the country is a major trading hub with a lot of visitors coming in from neighboring countries such as Kenya, Uganda, and Ethiopia. Now the government has established a quarantine zone that stops anyone from coming into the East African county.

Back on the frontlines of the crisis in California, Kamara says she believes we are not over the worse of the pandemic.

That’s why she is discouraged by protestors who are demanding businesses reopen. Kamara said too many Americans don’t realize the dangers of COVID-19 because of misinformation.

“Until that’s addressed, people won’t take it seriously,” she said.

As State Fights Fraud, Unemployed Californians Get Caught in the Middle 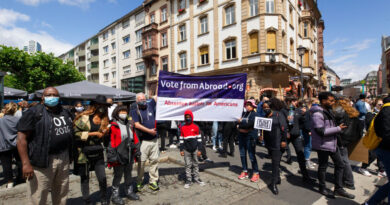 NOT ALL IS LOST AFTER CENSUS COUNT STOPS, CIVIL RIGHTS ADVOCATES SAY